I told you that was going to be a doozy!!! From the look on some of the faces above they were getting the full dose! The workout today was to motivate everyone to come out to OSU campus Saturday September 27th as we hold the Fight Gone Bad III fund raiser which benefits the Prostate Cancer Foundation and the Wounded Warrior Project. For more information on how to take part in Fight Gone Bad III check out the Athletes for a Cure website. 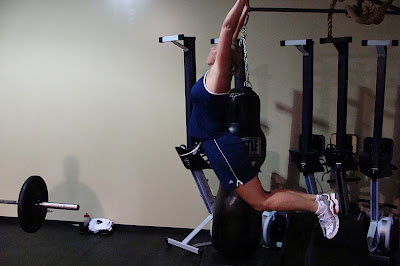 …is sometimes taken for granted by some of us here at Rogue. For others the pull-up presents a challenge that, just a short time ago, was thought to be impossible. Lynn has been working on getting her pull-up since she became a Rogue athlete. Today Lynn tried very hard to get her chin above the bar. She didn’t quite make it. However with the determination and effort that she displays above. She will be rocking out pull-ups, as recommended, for the workouts in a very short time!!

Posted in News, Workouts | Comments Off on The Pull-up…

You want to know about commitment?

Julie has been with Rogue for just a short time. However she took to the Rogue way of doing things very quickly. You could say that she is hooked. Just a couple of weeks ago Julie injured her foot playing flag football. She hurt it bad enough that she has to wear a protective boot. Julie comes into Rogue the day after she hurt herself in her boot. We assumed that she was going to request that we put her account on hold. Not this Rogue warrior! She asked us if it would be alright if she could still workout with us. Commitment. Who are we to deny anyone as determined and motivated as that. Great job Julie!

Posted in News, Workouts | Comments Off on You want to know about commitment?

“Or wo-man!” Today’s workout included the “man-maker”. Its basically a burpee with a delightful twist, dumb bells. We had a huge turnout at the noon and 5:30 classes. When you have that many people blasting through a workout in one room the energy and the adrenaline goes through the roof!

Nice work everyone! See you tomorrow!

Posted in News, Workouts | Comments Off on "We'll make a man outta ya!!"

A "Filthy" Labor Day at Rogue…

…”Filthy” as in “Filthy Fifty” that is! The Rogue athletes started off their Labor day with a “doozy” of a workout. For many of the athletes this was their first experience with the infamous “Filthy Fifty”. Every single one of them completed the workout. One of our athletes was having a tough time with it. The coaches told him that it would be “ok” if he wanted to stop. He told us that he wanted to finish it regardless and finish he did.

It takes a certain kind of individual to come in to Rogue, day after day, to work as hard as we expect our athletes to work. Not only do our athletes do the work but they do it willingly. And they all are reaping the rewards of their efforts no doubt by becoming stronger, faster, and leaner.

See you all tomorrow for some more!

Posted in Miscellaneous, News, Workouts | Comments Off on A "Filthy" Labor Day at Rogue… 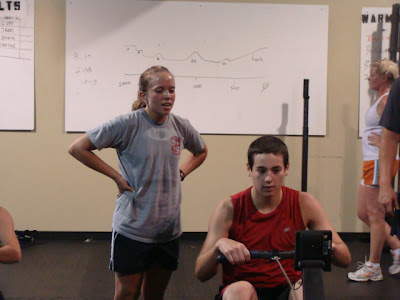 Tonya just got back from the U.S. Army Airborne school recently. Yep that’s right Tonya spent the last three weeks learning how to jump from a perfectly good aircraft. Now she is back home at Rogue where she belongs!

This morning the Rogue Running Team met for its Sunday run workout. The athletes ran six 400 meter sprints. That in of itself is very challenging. But our athletes are highly motivated (or crazy) individuals. RRT members Dan, Heather, Mark, J, and Andy stayed afterwards to participate in Cara’s workout too. True Rogue warriors! To get results it takes consistency and dedication and these athletes exemplify those attributes completely!

Posted in News, Workouts | Comments Off on "Jumpers, hit it!!!!"

The Rogue Running Team will meet every Sunday at 11AM to train for the race. Of course you know the training will be Rogue style so erase any visions of “long slow distance” out of your nuggets.

Deadline for Joining the Rogue Running Team is SEPTEMBER 7TH
Race Day!
On race day all of the Rogue Running Team will meet up at Rogue Fitness at 8AM and we will car pool over to the A&F campus to warm up. Rogue will have picked up all of the registration packets, number bibs and event t-shirts for the competitors earlier in the week. So all you have to do is show up and run your butts off then drink some beers, pretty simple.

Even if you’re not racing we want you to show up to cheer on your fellow Rogue athletes as they all shoot for personal bests in the 5k run.
Schedule
17 August 2008 – First Rogue Running Team workout
07 September 2008 – Deadline to join the Rogue Running Team
13 September 2008
• 8:00AM – Meet at Rogue Fitness to carpool to A&F campus
• 8:30AM – Depart for A&F Campus
• 9:30AM – Warm up for the race the Rogue way
• 10:00AM – Rogue Runners hit the trail and the Rogue Athletes not running better be blowing their lungs out cheering or there will be burpees!
• 10:15AM – 1st Rogue Runner crosses the finish line and receives their beverage.
• 11:00 – All runners are in and the drinking begins!
• Noonish – Designated drivers mop up the Rogue athletes and we head home, GOOD JOB!!
Sponsors
Rogue Ale Brewing Company

Posted in Workouts | Comments Off on Join the Rogue Running Team!!! 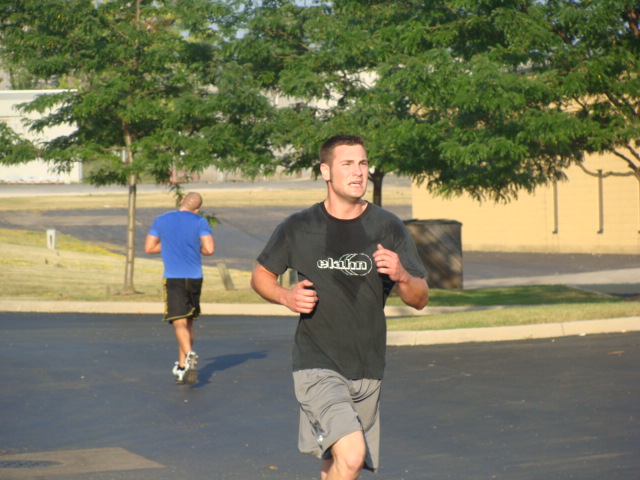 All the athletes did extremely well with the deadlift strength session. Tonya put 25lbs on her previous PR of 200

She always looks around for approval after a lift, awesome job!

Posted in Workouts | Comments Off on Ready set Go! 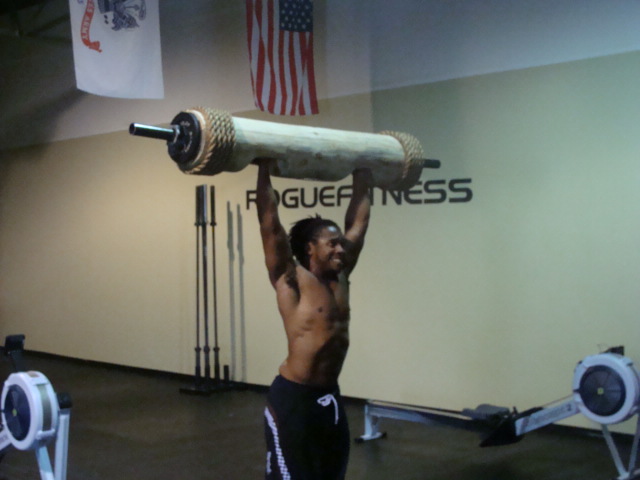 J using the new log instead of the bar during the Level 3 workout today. Thrusters are not fun with this bad boy!

Sunday’s all level workout was 2 person team event that involved a little strategy and teamwork. Cara linked up the teams and they were off to the races. Rowing, running, pushups and pullups. NICE JOB AMY AND KELLY FOR BRINGING IT HOME.

What a great ending to a great week here at Rogue. We have had some great workouts all week, and today was no different. The intensity in the gym has been off the charts.
Don’t forget to come cheer on our Rogue athlete Kevin Mueller at the Fairgrounds tomorrow. He starts his lifts at 2pm! 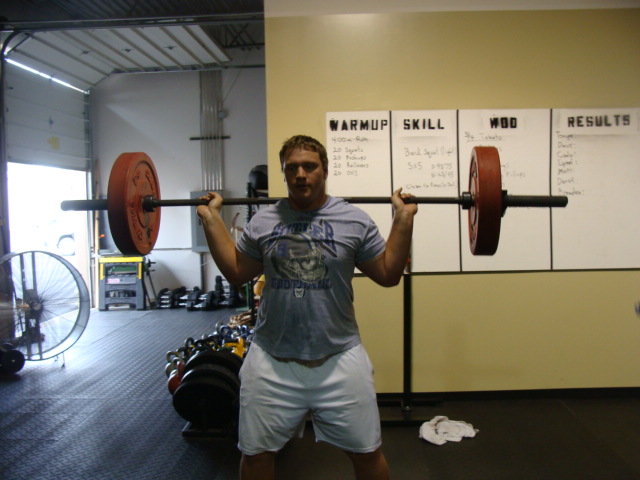 When it is 4th and inches… run the ball behind Ironman!!

The whole group worked hard tonight..keep up the work! 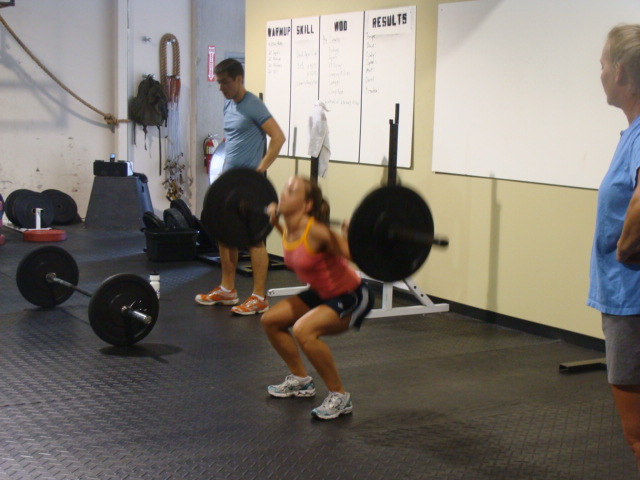 Working on some light back squats today!

Posted in Workouts | Comments Off on Great Week!